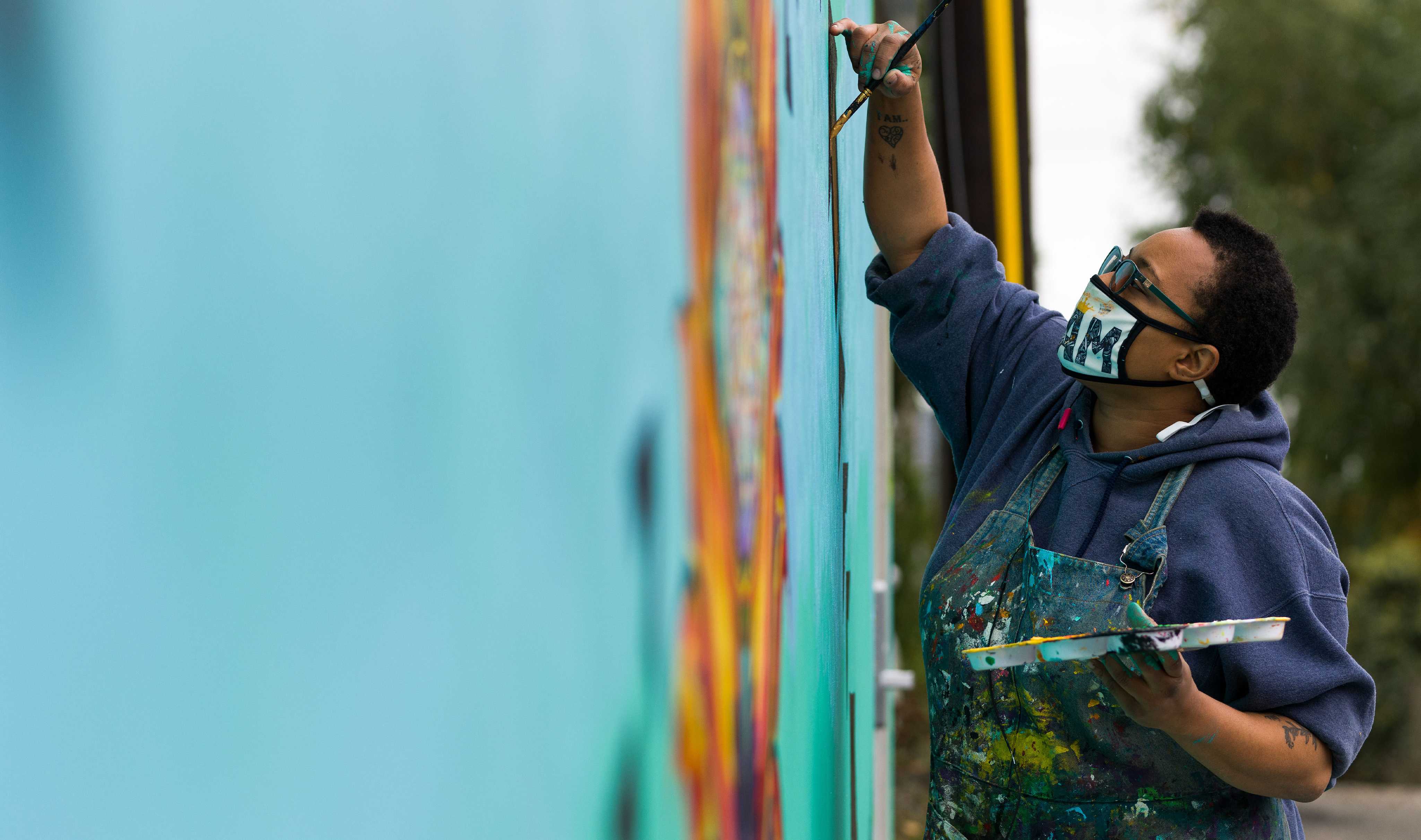 Artist #1: Kimisha Turner
Organizations she is supporting: Feed the People (which fed her family during the pandemic), Wa Na Wari
Name and location of mural: HEADSPACE, The Mio Apartments in the Roosevelt District - 1319 NE 65th Street

As a little kid, Kimisha Turner was scared and thrilled by a painting in her uncle’s bathroom. “It was this super big, creepy painting of a Hawaiian woman whose eyes followed you,” says Turner. “I hated going in there, but I also loved it because I remember thinking: How could a painting make me feel this way?”

The discovery that art can make you feel unexpected and competing emotions is part of the art Turner creates today. “I really love making beautiful work that has some uncomfortable things in it,” she says.

From a young age, she was making “really disturbing pieces to freak out my dad,” says Turner. She continues that shock approach today—like in the mosaic piece entitled "Gifts Without Voices," in which she honors Henrietta Lacks and a slave named Fortune. “The skull of Fortune is white, and there is a red bow that covers his mouth attached to a blue ribbon. The ribbon is held by his skeletal hand as if he is finally able to pull it after not having a voice or identity for over 200 years,” Turner says. “The red, white, and blue, of course, represents the American tradition and history of silencing Black people and rewriting history.”

Turner sees art as a gateway to empathy, which is one of the reasons she jumped at the chance to participate in Seattle’s Black Lives Matter mural in June. She got a text from artist Takiyah Ward asking if she wanted to participate, and she “ran to Lowe’s, got my paint, brought my son, and thousands of people were there. My son and I did the ‘B’.”

As a Black mom, Turner lives in constant fear for her son’s safety. That, on top of a deadly pandemic, and the realization that she wasn’t taking the best care of herself this summer all contributed to a much-needed reality check, she explains. “Before COVID, I had a three-hour commute every day. I was so tired, and I was drinking so much coffee and not taking care of myself,” Turner says. She ended up having a pulmonary embolism at work and was rushed to the hospital.

“It was a big wake up call,” she says. “Both of my parents have passed, and I see how easy it is to get wrapped up in the day-to-day stuff. But I can’t leave my son here on Earth without me.” Turner knew she had to better model taking care of herself for her son so he would learn to look out for his own well-being.

“Time is fleeting,” says Turner, “and it’s very easy not to care for yourself.” In an effort to be more present, she quit her job, focused on her art, and began truly taking care of herself.

One of the most important things she does—on her own and with her son—is meditating. “When I take a moment to sit and be quiet for 10 to 15 minutes, it makes a big difference,” says Turner. “Life is so chaotic, taking charge of the things you can control is important.”

When Stevie Shao’s neighborhood of Ballard began to shut down at the beginning of the pandemic, she wanted to bring life back into it. “It looked so bleak,” Shao says. “There was no color, no people, no activity.” She began painting murals on the plywood boards covering the store fronts using “fun and bright imagery and words of encouragement,” she says, including the phrases “take care” and “it’s going to be okay.”

“Public art, especially murals, have a way of being the voice of a community because the visual language is universal,” she says. The mural she created for the Amazon Care project is all about communication in community. She chose animals from the region and made them anthropomorphic, interacting playfully with one another.

“A community is made up of parts, and it operates because everyone cares for one another,” says Shao. “Having all of these natural elements and creatures interacting is a good representation of how healthy forests, ecosystems, and waterways all operate as a whole because the parts are in place.”

It’s also critical that members of a community care for themselves, she says. “A big thing for me as I’ve gotten older is realizing how it’s harder to care for other people if you are not taking care of yourself,” says Shao. During the pandemic, it’s become way more important for everyone, adds Shao, who clears her head on runs and walks.

“Healthy individuals mean healthy communities,” says Shao. She hopes that her mural—which also features positive messages like, “What’s good?” and “Let’s go!” offers folks a reminder that we are all in this as a community and gives them “a little pep in their step.” And who couldn’t use more of that right now?

“I really credit the birth of my daughter for the rebirth of my art,” says Moses Sun, the Seattle artist who was once a rising star in the international art world. Originally from North Carolina, he attended art school in Chicago and went on to live in Toronto, Los Angeles, Cleveland, and Helsinki. Along the way, he got some pretty big breaks showing in galleries and getting representation. But in 2001, at the tender age of 30, he dropped out of the art world to focus on a career making art in a corporate setting, directing commercials for companies from Disney to Microsoft. He kept making his art on the side.

And then, in 2013 his daughter, Akemi, was born, and it really changed his perspective, Sun explains. “I didn’t want her to grow up saying her dad used to be an artist,” he says. He began to create art with a greater purpose. “I took it much more seriously,” he says. “It was my outlet where I could control and make my world,” Sun says. It became a necessary escape from the pressure of working in the tech industry, until the cumulative stress of burning the candle at both ends came crashing down on him.

“I overworked myself and had to be hospitalized. I was too sick to do anything,” he says. After a three-week stay, Sun returned home with the realization that he had nearly worked himself to death. To recover, he took more than a year off and quietly turned to his art.

Then, in June, an offer to work on Seattle’s Black Lives Matter mural, “brought me out of my shell,” says Sun. Like Turner, Sun got a message from Takiyah Ward, the creator of Seattle’s Vivid Matter Art Collective, and within 24 hours, he was painting the letter M in “Matter.”

Creating that piece of art—the largest he’d ever done—made Sun realize that he had a voice people wanted to listen to. From there, he began making other large works around the city, including a 4,000-foot wraparound mural on the Wing Luke Museum of the Asian Pacific American Experience, for which he served as lead artist. That piece, says Sun, was communicating to the surrounding community—Chinatown International District—that “we are here for you, and the community is alive and well.”

The act of making art has always been political for Sun, who grew up marching in support of the Equal Rights Amendment with his father, who was a Vietnam vet and a member of the National Organization of Women. His father also introduced Sun to what it means to really care for others. “It is actively listening and being empathetic,” Sun says. “My father would say, ‘Don’t feel sorry for people, feel empathy for them.’ My father was really—as his friends described him—a friend to the world.”

Sun wants to extend the kind of care, compassion, and friendship to the community surrounding his mural. The background of the mural is an indigo blue, a color used by all of the diasporas—African, Latinx, Asian, and European—that make up the neighborhood. In the middle of the abstract expressionist piece, two hands come together as a representation of our humanity and us reaching out to each other says Sun.

“We are all human. We have these many things that divide us, but we do have this common ground that we may not even realize until we have this conversation.” A conversation that he hopes this—his tallest piece of art to date—will be a part of. “Maybe it will light a little spark of compassion inside of people and nurture them a little bit for that day.”

Want to see the murals in person? Visit and share on social media using the hashtag #muralsofcare.

Looking to enjoy these murals at home? Fill out this form to get a puzzle of one of the three murals sent right to your door. 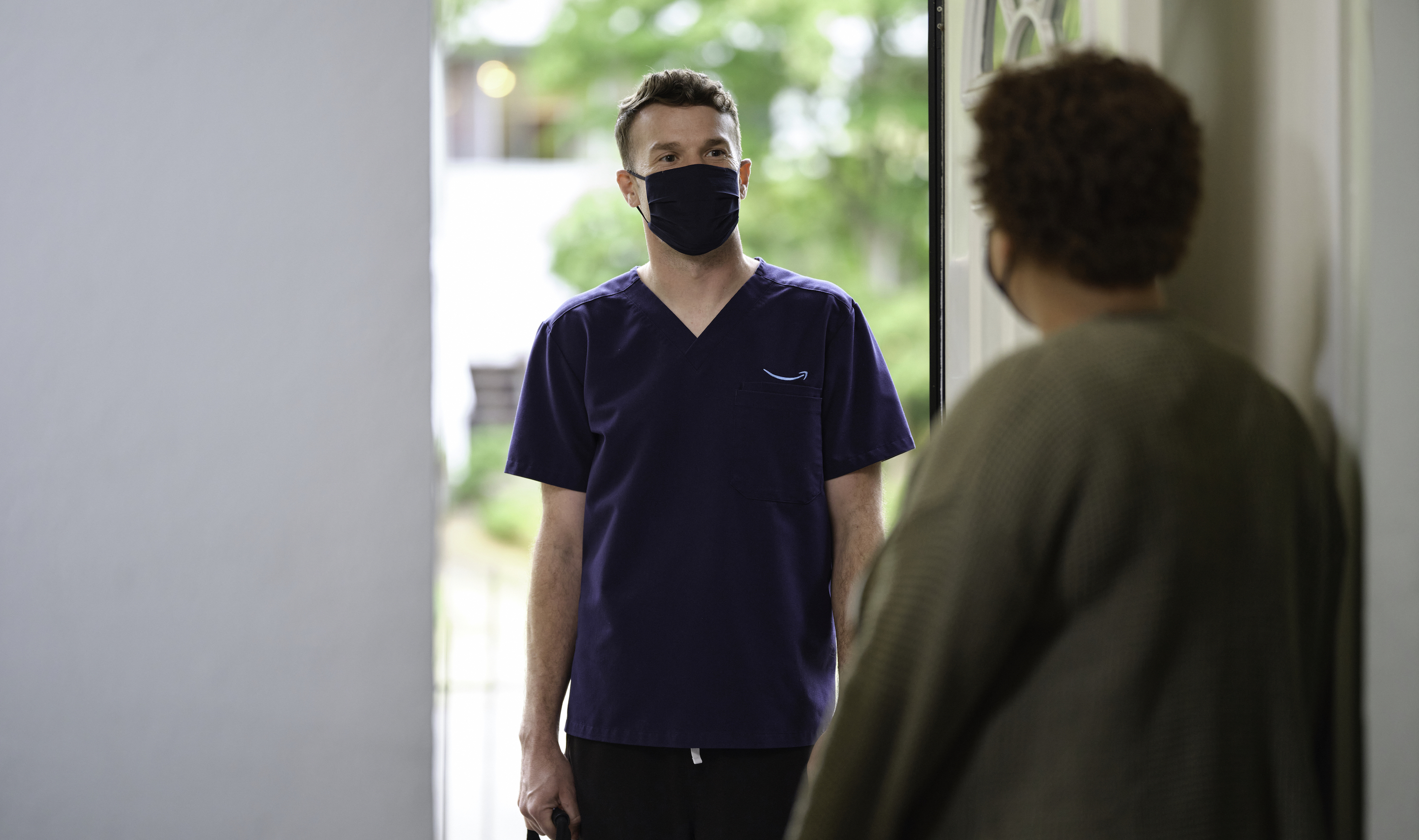 Amazon Care is now offering even more healthcare services to care for you and your family, including primary and preventative care. Learn how to get started.
Continue reading 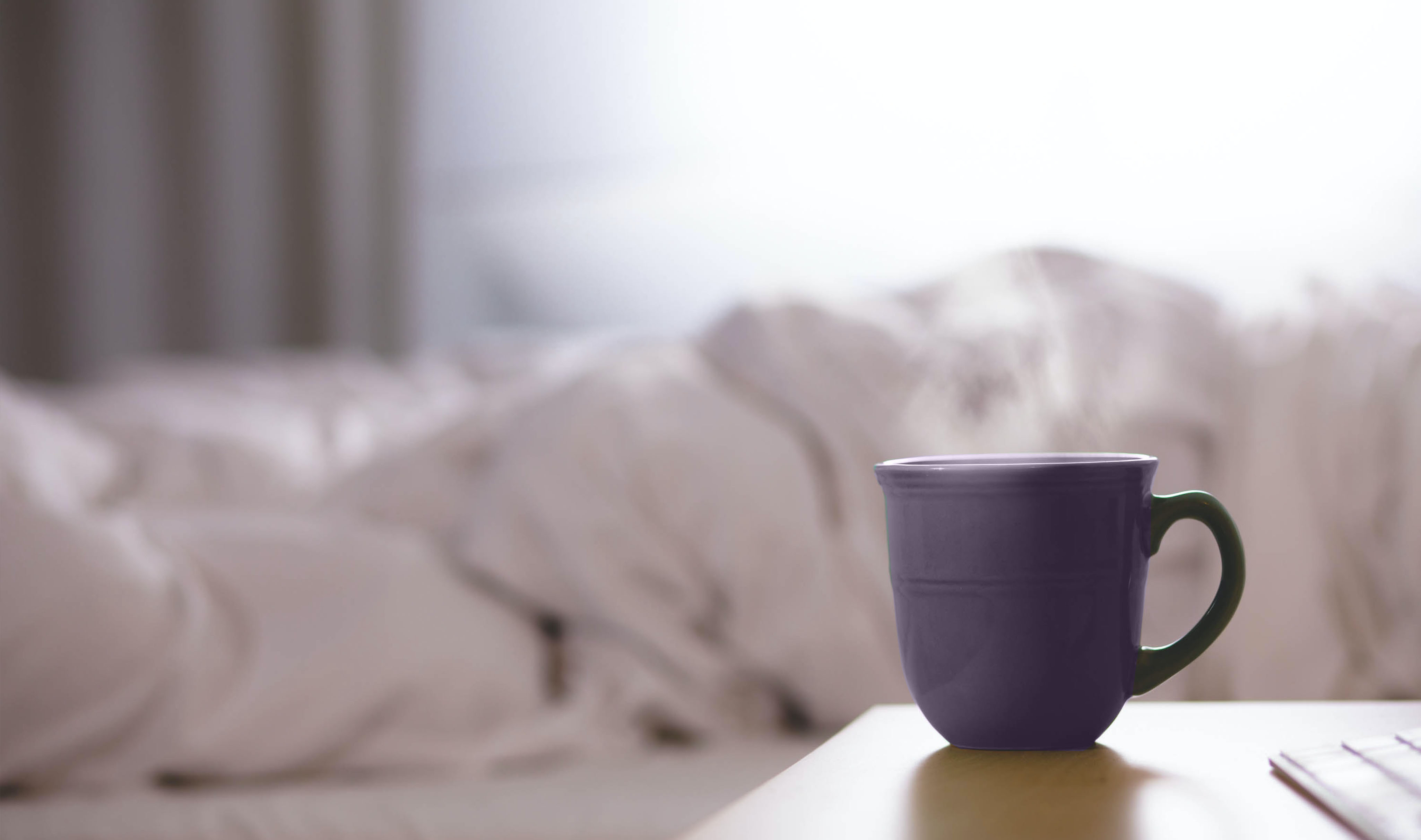 Your Complete Guide to Sore Throats (And How to Treat Them)

Sore throats are one of the most common reasons people see their family practitioner. Learn about sore throat causes, treatment and when to seek care.
Continue reading

Each week, you will receive an email detailing how to select habits that will help you to set reasonable and attainable goals.
Continue reading